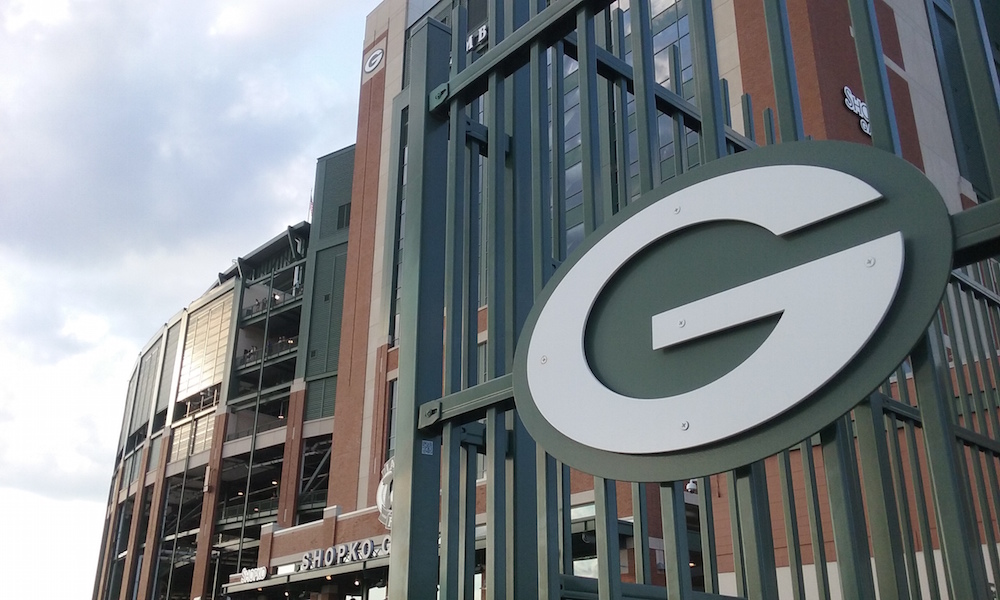 GREEN BAY — The Green Bay Packers’ 2022 NFL schedule will feature 17 regular-season games and three preseason games. It is highlighted by five prime-time contests (subject to flexible scheduling) on the original schedule for the ninth straight year (2014-22), seven games against 2021 playoff teams and five contests versus division winners from last year.

The Packers will open the season at the Minnesota Vikings, marking the fourth straight year and the eighth time in the last 10 seasons Green Bay has started the season on the road. It is also just the second time ever that Green Bay has played at Minnesota in Week 1 (2020).

Week 2 brings a division opponent at home for the fifth consecutive season when the Packers and Chicago Bears face off. The game will be played on Sunday night, marking the second straight year the home opener is in prime time and the 17th consecutive regular season that the Packers and Bears have squared off in a prime-time game. It is the third time in the last four seasons that Green Bay has opened up with two division opponents (2019-20).

The Packers go back on the road in Week 3 as they travel to face the Tampa Bay Buccaneers, marking the third straight year that Green Bay opens the season with two of the first three games on the road. Week 4 bring the Packers back to Lambeau Field for a matchup with the New England Patriots.

The Packers finish October and start November with three straight road games, marking just the third time this century (2012 and 2016) that Green Bay plays three straight contests on the road. The Packers travel to play the Washington Commanders in Week 7, the Buffalo Bills in Week 8 and the Detroit Lions in Week 9. The Week 8 matchup is the first prime-time game between the Packers and Bills.

Green Bay will end the regular season with three of its last four at home for the first time since 2011. In Week 15, the Packers host the Los Angeles Rams on Monday Night Football, marking the latest MNF contest ever at Lambeau Field. For the second straight year and for the fourth time in franchise history, the Packers will play on Christmas. It will be the first time Green Bay will play on the road on the holiday, as it travels to Florida to face the Miami Dolphins.

With the three-game preseason schedule implemented last season, the Packers will alternate between hosting one and two preseason games each year. This year, with the Packers hosting only one preseason game, the matchup is designated as the Packers Give Back Game, with a benefiting charity to be highlighted through the game and surrounding activities. More information about the nonprofit organization chosen for this year’s Packers Give Back Game will be announced soon.

For ticket information, please visit www.packers.com/tickets. For a secure method to buy and sell tickets, the Packers encourage fans to use NFL Ticket Exchange at www.ticketmaster.com/packers.

All Packers games can be heard on the Packers Radio Network, which is made up of 49 stations in Wisconsin, Michigan, Minnesota, Illinois and South Dakota. This year, the Packers transitioned to a new flagship station in Milwaukee, iHeartRadio Milwaukee’s 97.3 The Game WRNW. For a full listing of radio affiliates, go to packers.com/video/radio-network

Flagshipped by Milwaukee’s WTMJ-TV, Packers preseason games are televised over an 21-station network throughout the state of Wisconsin, Upper Michigan, northeastern Minnesota, the Quad Cities, Des Moines, Cedar Rapids and Waterloo in Iowa, Peoria in Illinois, St. Louis in Missouri, Bismarck, Fargo and Minot in North Dakota, Sioux Falls in South Dakota, Omaha in Nebraska and Anchorage, Fairbanks and Juneau in Alaska. For a list of affiliates, please go to packers.com/video/tv-network.

Green Bay Packers Give Back Game

*All preseason games will also be broadcast on Telemundo

A pdf of the schedule can be downloaded at the following link: https://static.clubs.nfl.com/image/upload/packers/cgwvxyfqbz0hxogosymv

at Minnesota, Sept. 11, 3:25 p.m. CT (FOX) – Of the past 39 regular-season meetings between the teams, 25 of those games have been decided by seven points or less…The Packers have a 30-30 record in away games against the Vikings, including wins at Minnesota in two of the last three seasons.

at Tampa Bay, Sept. 25, 3:25 p.m. CT (FOX) – The Packers and Buccaneers face off for the third time since 2020 (two regular season, one postseason)…It is Green Bay’s second visit to Tampa in three seasons (2020)…The Packers have won three of the last four regular-season matchups…Only two of the last seven contests between the two have been decided by a touchdown or less…The winning team has scored 20-plus points in each of the last seven games (including postseason) and 30-plus points in five of those contests.

vs. New England, Oct. 2, 3:25 p.m. CT (CBS) – They have split the last two matchups (2014, 2018), with both teams winning at home…New England holds a 6-5 advantage in the all-time regular-season series, while the Packers won the only postseason matchup, a 35-21 victory in Super Bowl XXXI…Two of the last three contests between the two teams have been decided by a combined nine points.

vs. New York Giants, Oct. 9, 8:30 a.m. CT (NFLN) – Game will be played at Tottenham Hotspur Stadium in London with a local kickoff of 2:30 p.m. …It is the largest football club stadium in London, with a capacity of 62,850…It is the Packers’ first international regular-season game…The Packers will become the 32nd NFL team to play in London since 2007…Previously, Green Bay has played internationally during the preseason on three occasions: in Toronto in 1997, Tokyo in 1998 and Winnipeg in 2019…Including the postseason, the Packers have one each of the last three matchups, scoring over 30 points in both of the last two games (31, 38)…Five of the last six games between the two teams (including playoffs) have been decided by 14-plus points, with each team winning three times.

vs. New York Jets, Oct. 16, 12 p.m. CT (FOX) – The Packers have won three straight over the Jets, including their last home game, a 31-24 victory in 2014…Each of the last three games against the Jets have been decided by single digits…In four of the last five contests, the winning team has scored 30-plus points…Of the 13 matchups, two have gone to overtime, including the last contest in 2018.

at Washington, Oct. 23, 12 p.m. CT (FOX) – The teams met last year on Oct. 24 in Green Bay, with the Packers winning, 24-10…Including the postseason, Green Bay has won four of the last six matchups between the two teams…The Packers’ last win at Washington was a 35-18 victory in the 2016 NFC Wild Card…Five of the last six contests between the two have been decided by 14-plus points (including playoffs).

at Buffalo, Oct. 30, 7:20 p.m. CT (NBC) – The two teams have alternated wins in the series since 1994 with each club winning four contests…Only four of the 13 previous contests in the series have been decided by single digits…Green Bay won the last matchup, a 22-0 victory at home in 2018…Neither team has won a road game in the series since 1991, a 34-24 victory by the Bills…The Packers are looking for their first-ever win at Buffalo.

vs. Dallas, Nov. 13, 3:25 p.m. CT (FOX) – It will be the first time former Packers head coach Mike McCarthy returns to Lambeau Field…Green Bay is 20-17 against the Cowboys (including postseason) and has won three in a row and eight of the last nine…The Packers have scored 34-plus points in five of those contests, including each of the last three…Including the postseason, it will be the eighth matchup between the two franchises in 10 years (2013-2022)…Green Bay is 11-5 at home against the Cowboys (including playoffs).

vs. L.A. Rams, Dec. 19, 7:15 p.m. CT (ESPN/ABC) – It will be the first time the Packers have hosted the defending Super Bowl champions since Oct. 14, 2001, vs. Baltimore…It will be the first prime-time matchup between the teams since they met on MNF at Lambeau Field (Nov. 29, 2004)…The Packers are on MNF for the 30th straight season…It will be the latest regular-season visit for the Rams to Lambeau Field since 1992, a 28-13 victory by Green Bay on Dec. 20…Green Bay has won six of the last seven regular-season matchups with the Rams and 13 of the last 18…Including the postseason, the Packers have won each of the last four home games against the Rams, outscoring them 116-59.

at Miami, Dec. 25, 12 p.m. CT (FOX) – The Packers have won four of the last five matchups with the Dolphins, including the last time they played (31-12 in 2018 in Green Bay)…Seven of the last 11 matchups between the Packers and Dolphins have been decided by single digits…Green Bay has scored 20-plus points against Miami in each of the last seven games…The Packers last played at Miami in 2014, a 27-24 victory…This will be only the second December game for Green Bay at Miami (Dec. 19, 1971).

vs. Minnesota, Jan. 1, 3:25 p.m. CT (CBS) – Will be just the third January matchup for the Packers and Vikings during the regular season (2015, 2021)…Three of the last four matchups between the two in Green Bay have been decided by six points or less, including a tie in 2018…The Packers have won four of the last five meetings…Green Bay has scored 22-plus points in 13 of the last 16 home games vs. Minnesota, including 37 last season.

vs. Detroit, Jan. 7-8, TBD (TBD) – Including a 1994 playoff victory, the Packers are 28-3 against the Lions in the state of Wisconsin since 1992…Green Bay scored 42 points in the meeting at Lambeau in 2021, the most it had scored at home against the Lions since posting 45 in 2011…The Packers followed it up with scoring 35 in an 18-point victory last season at home…Green Bay will close the regular season at home for the first time since 2018 when they faced the Lions.