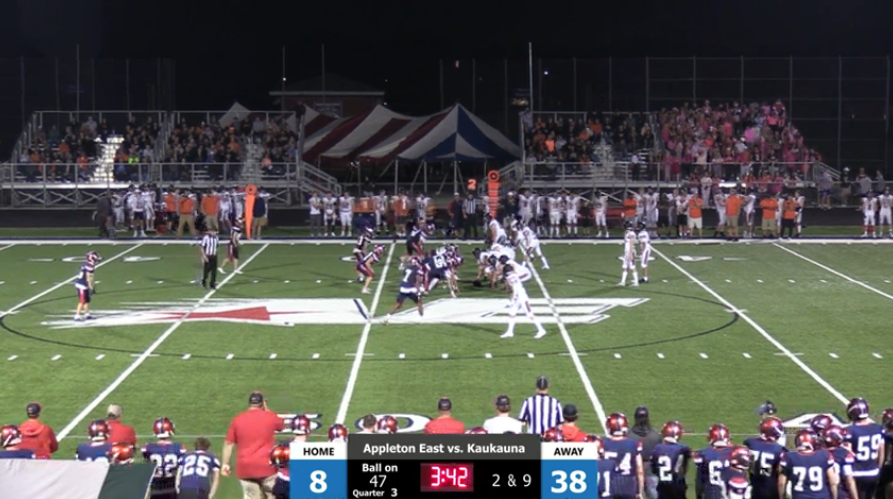 APPLETON — Appleton East’s fireworks show at halftime turned out to be the highlight of their homecoming week, while the Kaukauna Ghosts’ fireworks on the field decided the outcome of the game.

Kaukauna raced out to an early 31-0 halftime lead and didn’t look back, winning 38-8, and setting up a regular season finale this coming Friday against rival Kimberly.

Kaukauna (5-2, 3-2) got on the board early with a Kyle Seefeldt field goal to put the Ghosts up 3-0 early in the second quarter.

A Payton Miller fumble recovery for Kaukauna set up an eventual 55-yard TD pass from Finnley Doriot to Carson Sippel pushed the lead to 10-0.

A fumbled punt snap by Appleton East was recovered by the Ghosts inside the red zone, and a Noah Hofmann two-yard TD run put Kaukauna up 17-0.

With about a minute in the half, a Finnley Doriot 15 yard touchdown pass completion to Nolan Hall following a Brandon Vanasten interception pushed the Ghosts’ lead to 24-0.

Then, with under a minute, an 18-yard touchdown run by Garrett Weyenberg pushed the lead to 31-0 at the half.

A third quarter touchdown pass gave the Ghosts their largest lead at 38-0.

East was not about to give up on their homecoming night, however.

Appleton East scored on their opening drive of the fourth quarter, and converted the 2-point PAT.

However they could get no closer as time expired, Kaukauna 38-Appleton East 8.

We’ll email you the game summary of the Kaukauna-Kimberly game. Sign up here: