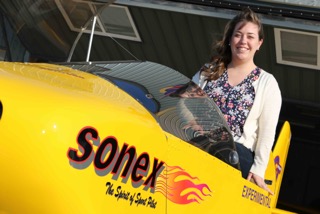 OSHKOSH — Jessica Bower, a 2007 Kaukauna High School graduate, has been hired as the newest member of the Hornets’ Nest research and development team at Sonex Aircraft.

Sonex, based at Wittman Regional Airport in Oshkosh, is a leader in the experimental kit aircraft industry, according to a company news release.

“Sonex is excited to have Jessica join our R&D staff,” Sonex founder and President John Monnett was quoted as saying in a news release. “She brings a full tool box of skills, insights and passion that will help us move forward on all our future projects.”

Bower, whose maiden name is Forster, is a MIT graduate with a Bachelor of Science degree in Aeronautics and Astronautics.

She earned her private pilot’s license at Wittman Regional Airport and and has been an EAA member since the age of 16.

In the Advanced Development Programs department of Lockheed Martin, Bower primarily was responsible for conceptual design of the next generation of military aircraft, including configuration layout and performance analysis, design skills that make her a great choice to shape the future of Sonex aircraft designs and carry-on the proud tradition of Sonex engineering, according to a news release.

“I am so thrilled to join the Sonex team, and to be back in the heart of experimental aviation that is Oshkosh,” Bower said. “The Skunk Works made me want to be an aerospace engineer, but experimental airplanes are my first aviation love. Sonex has a fantastic line of airplanes and products, and I think people will be excited to see what comes out of the Hornet’s Nest R&D Center in the future!”

Sonex produces a series of sport aircraft along with the AeroConversions line of products, which include the AeroVee engine, AeroVee Turbo, AeroInjector and ancillary aviation products.

Sonex Aircraft’s Sonex, Waiex and Onex sport planes, the Xenos sport motorglider and the SubSonex Personal Jet, offer outstanding performance in an easy to build, easy to fly kit package that can be purchased and completed with full technical support at an unrivaled price. Highly regarded as an engineering company, Sonex has diversified its offerings to include the Teros line of UAV aircraft for civil and defense missions in conjunction with Navmar Applied Sciences Corporation.

The 10 best restaurants in Kaukauna, according to TripAdvisor.com