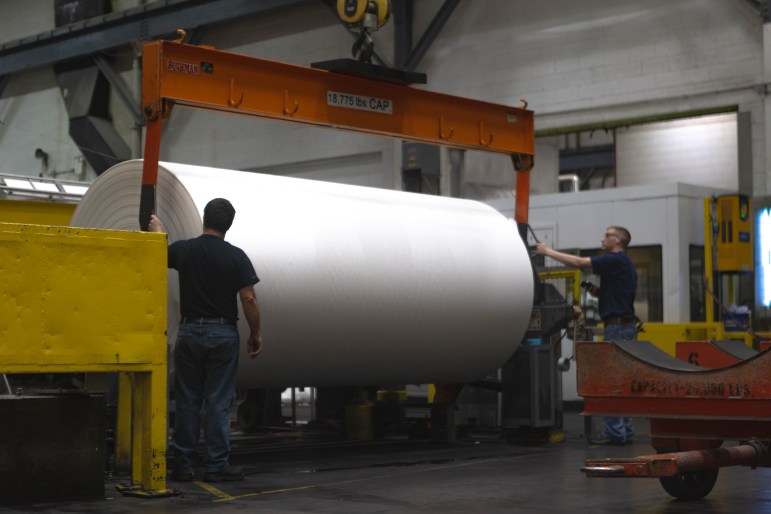 This piece was produced for the NEW News Lab, a local news collaboration in Northeast Wisconsin. This story first appeared in the Appleton Post-Crescent.

Patrick Neph has had to limit reservations at his Green Bay, Wisconsin steakhouse because he doesn’t have enough staff to serve a full house.

Neph owns Republic Chophouse and the soon-to-open Mangiare, an Italian restaurant just down the street. Between the two eateries, he needs to hire 10 to 15 more employees. But ever since he had to shut down Republic Chophouse in March 2020 for eight weeks due to the COVID-19 pandemic, he has struggled to find employees.

Before the pandemic, the only position Neph ever had trouble filling was line cooks, but now he needs servers, hosts, bartenders and people to work in the kitchens. Some nights, he only has five servers when usually he would have more than 10. Frequently, the kitchen only has three or four line cooks when it needs six to be fully staffed.

“Getting labor is astronomically tougher than it was,” Neph said. “And it’s across the board on every position.”

Neph’s situation is not unique. Across Wisconsin, employers say finding workers is their number one headache. The struggle existed before the COVID-19 pandemic, but the problem has intensified as the U.S. economy roars back to life.

There are more than 110,000 open positions on the Job Center of Wisconsin website, while the state unemployment rate currently sits at 3.9%, almost at the level seen immediately before the COVID-19 pandemic, according to the state Department of Workforce Development.

In northeastern Wisconsin, the unemployment rate is even lower. As of May, unemployment in Appleton was 3.1% and 3.5% in Green Bay.

Many Northeast Wisconsin employers are at a ‘desperation stage” when it comes to staffing, said Matt Valiquette, executive director of the Bay Area Workforce Development Board.

“We have proof of that, in the form of businesses that are reducing their hours and are limiting their options,” Valiquette said. “They just simply do not have the staff to maintain a full operational tempo. And that’s not every business, of course, but we’re beginning to see that far more widespread today than we did even a year or so ago.”

Shortage of workers not limited to one industry

He’s used to having a stack of resumes from eager applicants, but now, the hotel can barely find enough people interested in applying, let alone come in for an interview and make it to the first day on the job.

So far, the shortage hasn’t had much impact on guests’ experiences at the hotel, but it has put a strain on the staff.

“(Managers) are struggling to run a full shift with the full staff they have, in addition to any call-ins or no shows, so it can be wearing on our team,” Batley said. “There’s long days, long weeks, it’s tough to get people time off right now, especially if they want to do something in the summer, but I’m really proud of our team that’s busting their butts to do everything they can to make sure we keep our high standards and take care of our guests that want to support us.”

The headaches aren’t limited to the hospitality industry.

Ahlstrom-Munksjö, a specialty paper products manufacturer with four Wisconsin locations, is battling retirements of experienced workers and struggling to find replacements who want to come in at an entry-level job and take on papermaking as a life-long career, said Addie Teeters, head of marketing communications and public affairs for the company in Kaukauna.

“We are starting to see, I think, what a lot of industries are seeing,” Teeters said. “We’re seeing more retirements. People who have been papermakers their entire careers are starting to retire and we need to start adding bench strength and knowledge, letting our seasoned professionals really train and teach our next generation of papermakers.”

Experts warned long before the pandemic that Baby Boomer retirements and falling birth rates would create challenges for Wisconsin employers.

Workforce experts said some sectors of the economy can experience severe labor shortages, at any given point in time, while others do not. Currently, the struggles are spread across multiple areas, including manufacturing, transportation, health care and restaurant and service industries.

“There certainly are differences across industries,” said Ryan Long, a regional economist with the Wisconsin Department of Workforce Development. “There are definitely big differences just in terms of which industries have surpluses and which ones have shortages (of workers).”

Northeast Wisconsin is already seeing the long-term impacts of the labor shortage — supply chain disruptions, limited economic growth, businesses cutting back services or hours —  and these problems will only worsen as the shortage persists, said Eric Vanden Heuvel, vice president of talent and education with the Greater Green Bay Chamber.

“From a supply and demand standpoint, the demand for people is higher, the supply is low,” Vanden Heuvel said. “And so, normally we equate that to products, services, raw materials, but in this case, it relates to people.”

To combat the shortage, the Green Bay chamber of commerce recently launched a program aimed at attracting workers from other parts of the state, country and even the world to Northeast Wisconsin.

Employers increase wages and other job perks and benefits

To entice job hunters to come work for their company, employers have started to raise wages, offer sign-on and retention bonuses, and expand benefits.

Ahlstrom-Munksjö has raised its entry-level wages to between $20 and $22 an hour, and ended a requirement that prospects need a high school diploma or GED to be hired.

The Bridgewood Resort has raised starting wages for employees, and the hotel offers full benefits, complementary use of certain hotel facilities, and room and food discounts.

Neph’s restaurants offer health insurance and other benefits for full-time employees, and staff will have the option to work at both Republic Chophouse and Mangiare to get enough hours to qualify for those benefits. Neph has also raised wages. Pay for non-tipped workers has been increased between 20% and 25%, he said.

Despite the boost, all three businesses are struggling to fill positions. Many employers and political leaders point to more generous jobless aid given during the pandemic for holding back hiring.

Republican lawmakers passed legislation in June that would eliminate the extra $300 per week that unemployed people have received, but Gov. Tony Evers vetoed the bill. The payments are scheduled to end in September, reducing the maximum weekly unemployment check to $370.

But, experts say the issue is more complex than that. The pandemic exacerbated an already shrinking labor market that’s not being replenished by people moving to the state or immigrants filling positions.

At $670 a week, the state’s maximum unemployment benefit, including the additional $300 federal payment, comes out to about a $15 an hour job, although far from every jobless worker qualifies for maximum benefits. So, jobs paying below $15 an hour may have a hard time competing with the government-provided benefits, said Valiquette, of the Bay Area Workforce Development Board.

He thinks the extra money has “served somewhat of a financial disincentive for some folks to return to the workforce,” but cautions it is not one of the main factors.

“That’s just been one of those additional contributing factors that has made the situation more grave than it already was,” Valiquette said.

Removing the extra unemployment benefits “is not going to solve the issue,” said David Thiel, executive director of the Waupaca County Economic Development Corporation. This is a decades-long problem, he said, and those people not working now will likely return to the labor force once the pandemic unemployment benefits run out. And early research casts doubt on claims that ending federal jobless benefits early in other states has significantly eased workforce shortages.

Fox Valley Workforce Development Board CEO Anthony Snyder said he has “no doubt” that there are people taking advantage of the extra benefits and choosing not to work, but he is more concerned that there are still people out there, likely parents who had to leave the workforce to take care of their kids when schools and daycares shut down, that still need the money.

People across Wisconsin who lost work during the pandemic cite a range of hurdles to rejoining the workforce. Those include health concerns, a lack of child care, mismatches between skills and openings, transportation issues and financial damage from the state’s failure to deliver unemployment compensation quickly or at all.

“I’m just not sure that their lives are back to normal yet, and painting every single person who’s accepting of COVID aid with the same brush is not an appropriate response, I believe,” Snyder said.

Of those who lost or had to leave jobs due to the pandemic, women were the most affected. Between February 2020 and February 2021, 2.4 million women left the workforce, according to a report from Emsi, a labor market analytics firm.

“The jobs that women typically have held, and I don’t want to paint with a broad brush, but typically the roles in hospitality, such as servers, housekeeping, hotels, those are women who have those jobs and when those jobs got eliminated, they were the ones that got cut,” Snyder said. “So it was a combination of being laid off because hospitality just died, or they had to leave to go care for others.”

Snyder said he hopes most of these women can soon return to the workforce when schools reopen for in-person learning in the fall, but some may never come back.

MIT’s calculations take into account the cost of a family’s likely minimum food, child care, health insurance, housing, transportation and other necessities such as clothing and personal care items.

“If employers can’t afford in their business plans to increase their wages, they’re going to fall out of competition,” Valiquette said. “I understand that’s very problematic for many employers that aren’t in a position to offer higher wages, but for their competitors who can afford to do so or incorporate that into their business plan, (they) are going to find their workforce shortage challenges will be lessened.”

In addition to higher wages, workers are also looking for more flexibility from their employers, whether that’s the option to work from home or choose their own hours.

Much of this is a generational mindset difference, Valiquette said, but the pandemic also showed that businesses could still run smoothly while employees work from home or choose their own hours.

Valiquette himself changed some policies at his office to provide a more flexible work environment to ensure he wouldn’t lose his staff to other employers.

Obviously, not all employers are able to offer work-from-home options or much flexibility of hours. But those who can will stand out among their competitors.

“Those companies that can adjust the quickest will likely find themselves much further ahead, and at a greater advantage compared to their competitors when it comes to competing for workforce,” Valiquette said.

Contact Natalie Brophy at 715-216-5452 or nbrophy@gannett.com; follow her on Twitter at @brophy_natalie. This piece was produced for the NEW News Lab, a local news collaboration in Northeast Wisconsin.