Ghosts to visit schools Friday before heading to Madison 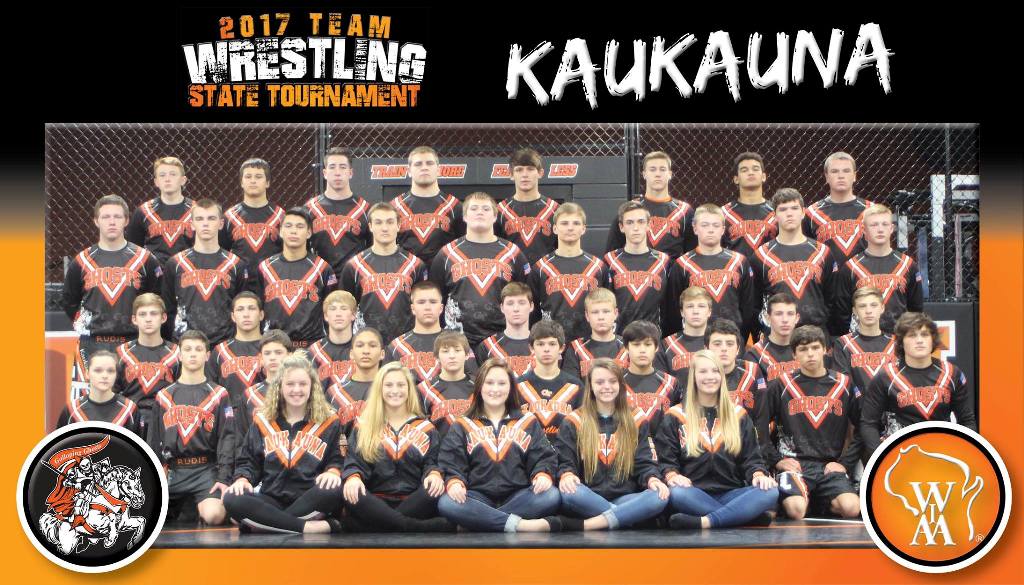 The team will board buses at 9 a.m. for the school tour, according to a post in the Kaukauna Pictures Facebook group  by Jenny Van Asten.

Three-time defending champion Kaukauna is back at the WIAA Division 1 state team wrestling tournament for the eighth time in the last 10 seasons and for the 15th time overall.

Quarterfinals begin Friday at 5:30 p.m. at Kohl Center in Madison.

The Galloping Ghosts had a string of five straight appearances from 1999-2003 and have now equaled that streak with their current run of appearances.

The Ghosts’ qualified for state with a 57-9 victory over Pulaski in the sectional final held at Pulaski.

Stoughton has finished state runner-up to Kaukauna the past two seasons. The Vikings are making their fourth straight appearance and their 11th overall.

This season, they earned their way into the quarterfinals with a 36-25 win over Elkhorn in the sectional final held at Elkhorn.

THE TOURNAMENT: The 26th Annual Wisconsin Interscholastic Athletic Association State Team Wrestling Tournament will take place Friday and Saturday, March 3-4. The tournament is held at the Field House on the University of Wisconsin campus in Madison, Wis. Ticket prices for the tourney are $13 for the Friday session and $8 for the Saturday sessions.

TOURNAMENT LIVE STREAM: The quarterfinals, semifinals and finals of the WIAA State Team Wrestling Tournament will be streamed live on the WIAA.TV portal of the NFHS Network on a consumer subscription basis. To purchase a subscription to the live programming for only $9.95 per month, log-on to www.wiaa.tv or www.nfhsnetwork.com and click on the subscription image in the middle of the page. Archived streams of the events will be available on demand on the NFHS Network 72 hours after the tournament without requirement of a subscription.

TEAM TOURNAMENT OVERVIEW: The first WIAA State Wrestling Tournament was held in 1940. Until 1992, team champions were determined by a point system based on individuals’ placing in what is currently the individual championships. For the first time in 1992, a team champion was determined by a separate tournament series involving dual matches. UW-Stevens Point hosted the first two championships. West Allis Central hosted the meet from 1994-2004. Since then, the tournament has been held at the UW Field House. There were 334 programs entering the tournament series, including 128 in Division 1, 102 in Division 2 and 104 in Division 3.

LAST YEAR: Kaukauna won the Division 1 team title for the third year in a row. The Galloping Ghosts defeated Stoughton in the final for the second straight year, defeating the Vikings 29-27. Ellsworth won the Division 2 championship by downing Wisconsin Lutheran 29-27 in the title match, and Fennimore edged Stratford 27-26 to win the Division 3 title.

ABOUT THE DIVISION 1 FIELD:

Holmen is making its first appearance in the tournament field since a run of three consecutive trips ended in 2012. The Vikings advance to the quarterfinals for the fifth time overall. The only time they have advanced past the quarterfinals to the semifinals came in 2012. The Vikings downed Sauk Prairie 27-24 in the Baraboo Sectional final to earn their berth in the final eight. Hudson is appearing in the team tournament for the third straight season and for the fourth time overall. The Raiders advanced to the semifinals in 2011 and 2015 before being ousted from title contention, which represents their furthest advance in the tournament. They are the representatives from the Stevens Point Sectional following their 36-33 victory over Marshfield in the final. Menomonee Falls is also making its fourth appearance, all coming in the past five seasons. The Indians lost in the quarterfinal round in each of their previous three appearances. This year, they upended Nicolet 63-15 in the final of the Pewaukee Sectional to earn their return to the State quarterfinals. It’s also Oak Creek’s fourth trip to the team tournament. The Knights’ prior appearances came in 1996, 2003 and 2007, falling in the quarterfinals in each of those appearances. It is also pertinent to note they made an appearance in 2004 as a co-operative program with Jubilee Christian. The Knights return to the team tournament after a 10-year hiatus following a 49-20 win over Kenosha Bradford/Reuther in the sectional final held at Kenosha Bradford. Waterford advances to the State for the second time. The Wolverines’ first appearance, which came two decades ago, resulted in a runner-up finish in Division 2. This season, the Wolverines advance by downing Wauwatosa West/East 54-19 in the Mukwonago Sectional final. Slinger is making its first appearance in the State Team Tournament. The Owls rolled to a 53-21 victory over Germantown in the final of the Hartford Sectional to gain entry into the State field.

ABOUT THE DIVISION 3 FIELD: Defending champion Fennimore will make its third straight appearance, which accounts for its total number of appearances. The Golden Eagles were eliminated in the semifinals in their first experience in 2015. They defeated Darlington/Black Hawk 43-24 in the final of the Parkview Sectional to earn the chance to repeat as champion. Last year’s runner-up Stratford will make its sixth appearance in the State Team Tournament in its quest for the Tigers’ first title. The four State Tournament experiences from 2001-04 resulted in runner-up finishes in 2001, 2002 and 2003. The Tigers advance from the Amherst Sectional came following a resounding 80-0 thrashing of Weyauwega-Fremont in the final. Random Lake returns to the State Tournament for the sixth straight season and for the eighth time overall. The Rams’ most notable appearance in the State Tournament was a runner-up finish in 2009. They posted a 30-26 triumph over Reedsville in the sectional final held at Laconia. Spring Valley/Elmwood is back in the State Tournament for the fourth straight season and for the fifth time in the last six seasons. In addition to their one title won in 2015, the Cardinals have finished runner-up twice, in 2012 and in 2014. They qualify this season from the Boyceville Sectional with 40-30 victory over Durand in the final.

NEED THE QUALIFIERS?: All rosters of qualifying teams are available on the media restricted area of the WIAA website at: www.wiaawi.org.

NEED CREDENTIALS?: Requesting media credentials for the 2017 WIAA Team Wrestling Championships must be done by noon, Tuesday, Feb. 28. Complete and submit the online credential request form in the restricted media area of the WIAA website. Verification of approved credentials is also available in the restricted media area. Parking may be purchased at Lot 17 (north of Camp Randall), and media credentials will be available at Gate C located at the southwest corner of the Field House.