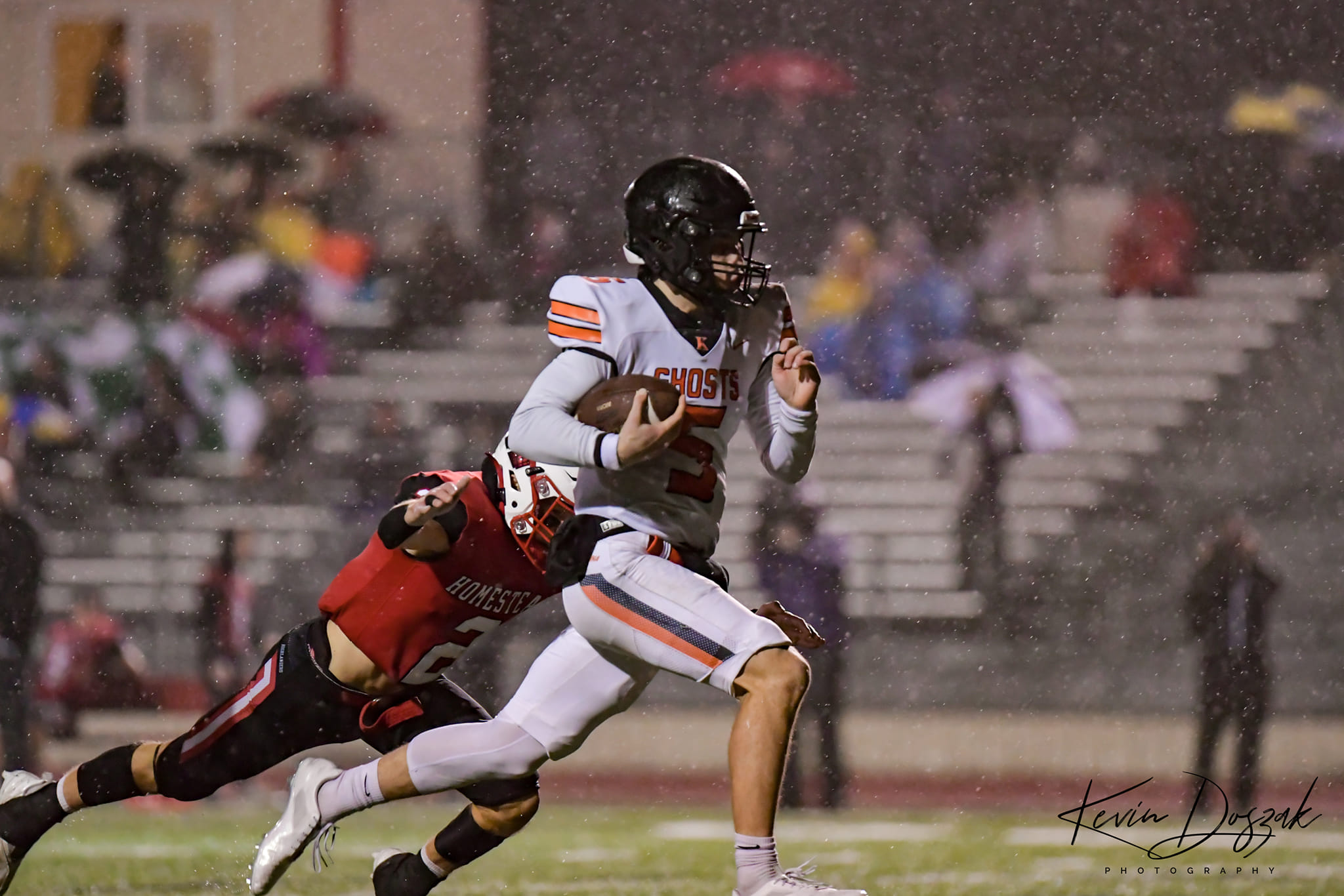 MEQUON — The talk this week in Kaukauna was as much about Friday’s weather forecast as it was about the Ghosts’ two upset victories to open the playoffs, and a chance for a third.

But the heavy rain that delayed the opening kick by 30 minutes dampened neither the offense nor defense as 6-seed Kaukauna rolled to a 41-13 win over 5-seed Homestead High School in a Level 3 WIAA Division 2 playoff football game.

In the first three weeks of playoffs, Kaukauna has knocked off the 2, 3 and 5 seeds on its side of the bracket.

The offense was predictably efficient throughout the game with the offensive line leading the way for star running back Noah Hofmann.

But it was the defense that had three key stops to kill multiple Homestead scoring opportunities, as well as a pick-6 score of its own.

The Ghosts jumped on the board quickly with a Hofmann 68-yard rushing touchdown on the second play of the game.

Homestead came back to score, but decided to go for 2 on the conversion. The defense stuffed the play at the 1 to hold the lead at 7-6.

After trading stops, and with Homestead driving, a Kaukauna 48-yard pick-six interception by Owen Broderick put the Ghosts up 13-6.

The defense came up big again on Homestead’s next drive, forcing a fourth-down turnover on downs deep in Kaukauna territory.

On its next possession, Kaukauna drove the lingth of the field, but a fumble inside the Homestead five killed a promising scoring opportunity right before the end of the half.

The defense made a statement to open the second half, once again turning back Homestead’s drive.

A passing TD on Kaukauna’s first drive of the second half put the Ghosts up 20-6.

On Homestead’s next series, Kaukauna’s defense stiffened once again, forcing another turnover on downs.

That led to a 55-yard touchdown run by the Ghosts, and the rout was on, pushing the Ghosts’ lead to 27-6.

The Ghosts forced another turnover on downs at the 9-yard line, and on the next play Hofmann ran for 91 yards for another touchdown to put the Ghosts up 34-6.

Kaukauna followed Homestead’s first score of the second half with a long drive and score of their own to push its lead to 41-13 late in the game.

The winner faces either #1 River Falls or #3 West De Pere with an appearance in the state title game on the line.