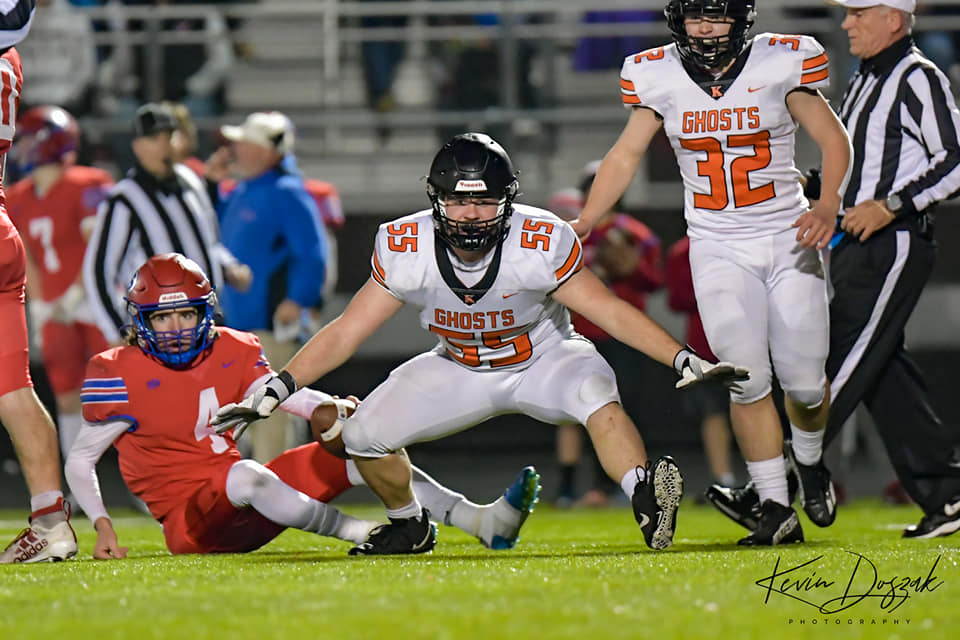 SLINGER — The Kaukauna Galloping Ghosts football team came into their Division 2 WIAA Level 2 game riding a wave of confidence after a convincing Level 1 playoff win a week ago.

And it showed, as the 6-seed Ghosts upset 2-seed Slinger 45-24 Friday in Slinger.

The win sets up a showdown next Friday with a quarterfinal game against 5-seed Homestead, which upset top-seed Hartford 10-7.

Fox Valley Association offensive player of the year, running back Noah Hofmann, dominated on the ground, accounting for five of Kaukauna’s TD’s.

He scored on the game’s opening series, and there was little the Owls could do to slow down the Ghosts’ run game.

Hofmann’s opening-drive TD was followed by a keeper from quarterback Finnley Doriot to push the score to 14-0 halfway through the first quarter.

Slinger had success through the air however, and a 67-yard touchdown pass put the Owls back into the game quickly.

Kaukauna ended the quarter with a Brady Hoffer field goal giving the Ghosts a 17-7 lead.

After a stop to open the second quarter, Hofmann scored again on a 49-yard run.

After stopping Slinger, Kaukauna drove the length of the field to set up Hofmann’s third score of the game.

Slinger hit a 42-yard field goal as time expired in the half with Kaukauna leading 31-10.

Slinger opened scoring in the second half to close the gap at 31-17.

Kaukauna’s offense sputtered in the first two series of the second half, but the defense was able to force Slinger into another time consuming drive, ending with a drive-killing pick off by Payton Miller.

That sparked an 84-yard Noah Hofmann run on the next play.

Slinger responded with a lengthy drive of their own to close the gap again at 38-24 with a little over 10 minutes to go in the game.

But Kaukauna responded once again with Hofmann’s fifth and final TD of the game.

Ghosts’ wrestlers roll into post-season with another conference title