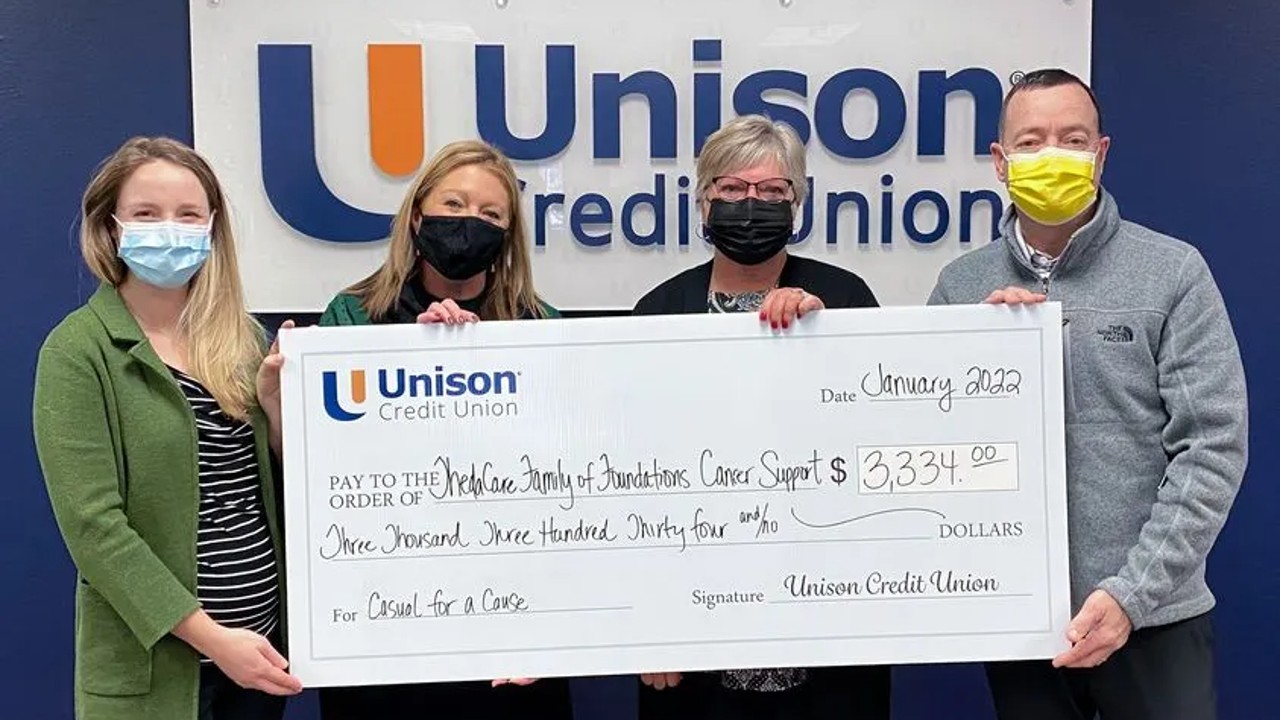 Unison Credit Union raised more than $3,000 during their annual Casual for a Cause fundraiser last year. The funds have been donated to the ThedaCare Family of Foundations to support patients with cancer. This donation from Unison Credit Union is in honor of a team member, Deana Schemm, who is currently undergoing treatment for cancer at ThedaCare. Check Presentation (L-R) – Erin Tyink, ThedaCare Family of Foundations; Erika Arnoldussen, Deana Schemm and Unison President/CEO Mark Hietpas

KAUKAUNA — Deana Schemm of Kaukauna was diagnosed with Stage 4 colon cancer last March. Since then, she’s been consumed with a series of difficult and precious moments. Deanna works for Unison Credit Union, where they raised over $3,000 to show their support.

Unison Credit Union raised more than $3,000 during their annual Casual for a Cause fundraiser last year. The funds have been donated to the ThedaCare Family of Foundations to support patients with cancer. This donation from Unison Credit Union hits close to home – one of their team members is currently undergoing treatment for cancer at the ThedaCare Regional Cancer Center.

Schemm has spent several months receiving treatment and surgery, while also cherishing her time with loved ones.

“When you get that diagnosis it just turns everything upside down,” said Schemm. “I did not want anyone to know at first. I was working at the Unison Credit Union corporate office in Kaukauna at the time, and spoke with our President/CEO, Mark, and Chief Operating Officer, Cathy. They provided phenomenal support for me. They were truly concerned about my well-being, not just my work.”

Schemm has been a faithful employee of Unison Credit Union for 28 years. She loves her job and co-workers, and also finds joy in helping people. Co-workers said she is one of the most compassionate and giving people they know.

“If you know Deana as a person, she’s a friend to everyone,” said Kelli Clussman, Chief Marketing Officer at Unison Credit Union. “When my daughter, who is now 17-years-old, was born, Deana and her husband came to the hospital and brought us a gift and food. When she received this diagnosis, it hit us all. We wanted to wrap our arms around her and her family.”

Schemm said she always felt supported by her family, friends and co-workers, near and far. So much so, that on the day Deana had surgery to remove her cancer, she had more than 200 people from her workplace, her campground community, family and friends wearing T-shirts in her honor. The shirts said “No One Fights Alone” with a graphic design of a ninja fighting.

“I have three grandchildren and our middle grandchild had given me a temporary ninja tattoo and she told me, ‘Grandma, you fight like a ninja’,” Schemm recalled. “Every day that I had chemotherapy treatment, we would put on those tattoos. When it came time for surgery, my sister had designed T-shirts to wear on my surgery day. I cried when I heard about all of the people who were also wearing the shirts.”

Schemm’s employer, along with co-workers, have offered several ways to help ease the burden of her cancer treatment. Many co-workers have given small gifts, words of encouragement, cards, flowers and much more. She has also been working from home, during the hours that work best for her.