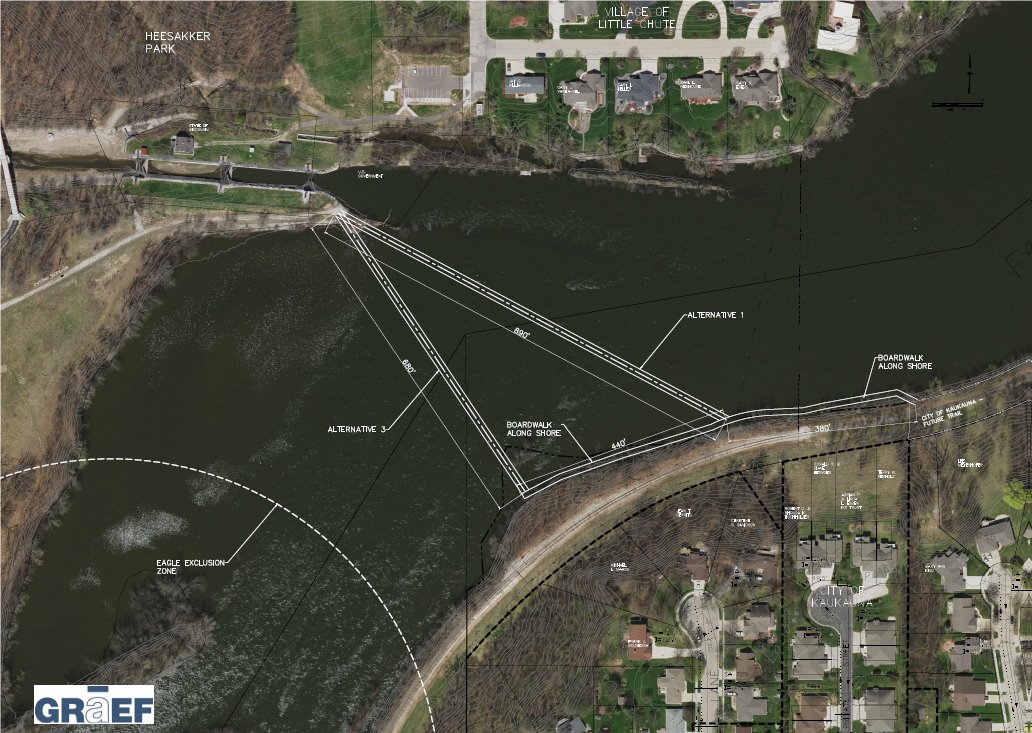 KAUKAUNA — A proposed boardwalk that would span the Fox River between Kaukauna and Little Chute could cost up to $2.7 million, according to a consultant’s report.

The costs was based on two possible locations for the span and different types of bridges. The report indicated a variety of grant funding sources to help offset the costs.

The report by GRAEF Engineering of Green Bay was presented March 15, 2017 at a public meeting. Read the full report HERE.

The report identified two possible locations that would connect would connect the Heritage Parkway Trail and Heesakker Park in Little Chute to land across the Fox River in Kaukauna near the end of 10th Street.

The first alternative spans from the eastern tip of Little Chute Island to the railroad parcel
approximately 380’ from the end of the property line, according to the report.

In this location, the north end of the new main structure would be located on the Little Chute Island property and the south end would terminate near shore at a boardwalk adjacent to the railroad
property.

The boardwalk would extend along within the river along the railroad property to the Kaukauna parcel to the east.

The approximate overall length of structure required would be 1,270 feet, consisting of 890 feet of stream-crossing structure and 380 feet of boardwalk along the shore. The alignment of this
alternative is more fluid and direct, providing smaller angles of travel along the route.

It also requires a shorter portion of boardwalk than the other alternative.

The main structure for this alternative is oriented at a greater skew to the
stream flow. Structure design would need to accommodate the actual stream flow,
and may require slightly larger piers, or longer spans.

The second alternative under consideration shares the same north termination point on Little Chute Island as alternative No. 1, but spans at a different angle slightly west, terminating along the railroad property approximately 820 feet from the property line of the City of Kaukauna owned parcel.

The south end of the new main structure would terminate at a boardwalk adjacent to the railroad property.

The approximate overall length of the structure would be 1,500 feet, consisting of 680 feet of stream-crossing structure and 820 feet of boardwalk along the shore.

A crossing at this location would have a smaller skew with relation to the streamflow, but requires larger turning angle for trail users at the main span/boardwalk interface.

The report also presented two options for the bridge structure.

The superstructure could either be supported on a pile bent or a concrete pier on spread footing foundation.

The superstructure could either be supported on a pile bent or a concrete pier on spread footing foundation. The railing for the steel trusses is the typical angle rails for prefabricated bridges. Other railings can be installed for additional cost.

The proposals now must be considered by the city of Kaukauna and village of Little Chute for further action.